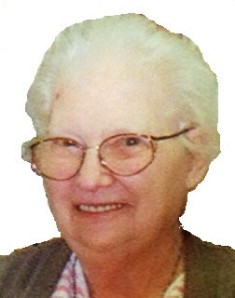 Olga (Polowka) Kucynda, 87, of West Easton, passed away Tuesday, October 11, 2011. She was the loving wife of 65 years to Michael Kucynda. Born in the Ukraine, she was the daughter of the late Dmytro and Anna (Korchun) Polowka. She worked as a seamstress for Strongwear Pants Co. for over 20 years and retired as a custodian from Philip Lauer Middle School in 2001 after 15 years. Olga was a member of Holy Ghost Ukrainian Catholic Church, West Easton.

A viewing will be held Saturday 9:00- 9:45AM with a Divine Liturgy at 10AM all in Holy Ghost Ukrainian Catholic Church 315 Fourth St. West Easton, PA 18042. Burial to follow in the parish cemetery. Arrangements care of Kohut Funeral Home, Inc.

Donations can be made in Olga’s memory to the church or to the Alzheimer’s Assoc. 399 Market St. Suite 102 Philadelphia, PA 19106.

Bonnie E. Kirkhoff, 91, of Allentown passed away peacefully on Sunday, October 9, 2011. Born in Mohrsville, she was the daughter of the late James and Minnie (Himmelberger) Kirkhoff. She began her hospitality career in New York City, returning to Allentown to work at the Bethlehem Steel Club and ultimately Saucon Valley Country Club. Bonnie thoroughly enjoyed her career at Saucon, specializing in wedding planning, banquets, and day-to-day management of many of the Club’s restaurant, dining, and special event functions. In many ways the members and co-workers were her family. She spoke fondly of the families and friendships that were cultivated over her years of service.

Survivors: She will be sadly missed by her entire family. Siblings Helen Remlinger, James Kirkhoff, and William Kirkhoff and his wife, Thelma; nephew Rick Hafer and his wife Elizabeth; grand nephews and niece, Zachary, Weston, and Amaura. She was predeceased by her brother, Robert, and sisters Betty Hafer, Kathryn Groover, and Elsie Foster.

Services: will be private. Arrangements, Kohut Funeral Home, Allentown. Online condolences may be made at: www.kohutfuneralhome.com.

Donations may be made in Gladys’ memory to the Phoebe Nursing Home Resident’s Fund care of Kohut Funeral Home, Inc.